While in the previous year colloquium coordinator Peter Hoerig, DL4BBU, was able to announce a veritable 'stampede' of would-be presenters of technical papers, he had to report with considerable disappointment at the opening of this year's event that never before he had so much difficulty in putting together a programme as for the 33rd colloquium because of the deplorable lack of technical papers put forward. It was only after some heavy lobbying of some of the regular presenters that it was possible to hold the event at all. Owing to the scarcity of papers the 'official' part of the programme closed at around 1400 hrs without their having been the customary lunch break, and this afforded delegates the opportunity for extensive personal discussions and to take advantage of the various test equipment that had been set up.

Notwithstanding this, some 170 delegates from across Germany and neighbouring countries, among them HB9, PA0 and ON attended on 20 February. A warm welcome was extended to exotic guest BG4AGM (BG4 Annual General Meeting!), Di Xu from Shanghai, who happened to be on a business trip in Germany. 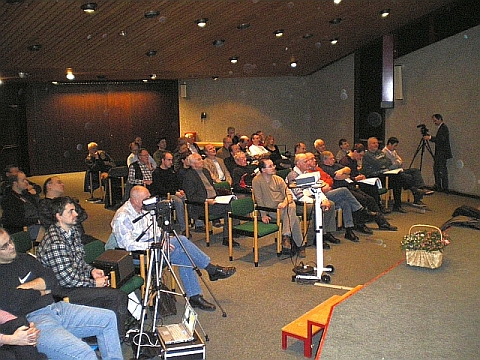 As usual, the convention had been organised by OV Herrlichkeit-Lembeck, N38 in cooperation with DARC District N and the Volkshochschule Dorsten.

The official part of the convention kicked off with the introduction of delegates, followed by the award ceremony for the winners of the three contest categories of the UKW-Pokal (VHF-Cup) conducted by Martin Henz, DL5NAH. Martin's analysis indicated that the number of logs submitted remained at the previous year's level. However, he could report that a new record was established in the single-operator category.

Michael Kuhne, DB6NT, was placed first with his son Matthias, DK5NJ, being runner-up.

Uwe Zemke, DL1SUZ, came in third. As usual, the DL0GTH team won the multi-operator category with the 'customary' runners-up DM7A narrowly defending this position against the team of DF0MU.

In the local-chapter category OV Naila (B23) achieved a record score of an incredible 48,000 points, placing them ahead of long-time champion Elbe-Elster (Y43), with OV X06 coming in third. 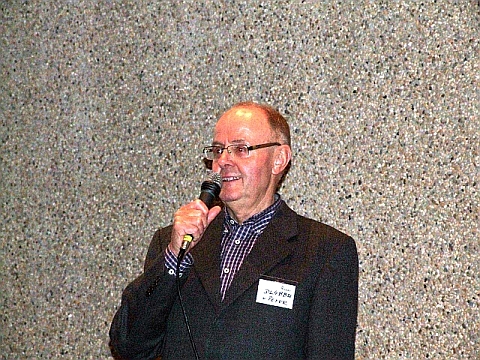 Following a review of the 2009 contest events and a not-so-serious outlook on the future development of contesting through 2048 by the youngster Manuel, DO6NX (son of DL6NCI) and his sister Sabrina, DB6NI - which raised a lot of laugh.

Jürgen Dahms, DC0DA , then kicked of the presentations of technical papers, starting with a description of his first steps on 134 GHz. Reporting an initial contact in the band withDF6VB/p on 29.06.2009, he outlined the peculiarities of transverter construction for this band, where the lack of modules with sufficient oscillator power necessitates the use of two switchable OCXOs - one for the receive mixer, the other for the cw transmitter. As ever, Jürgen provided sufficient details of the basic concept and the mechanical arrangement of the system to enable experienced microwave amateurs to replicate his results.

Carsten Vieland, DJ4GC, whose specialist field of activity is circuit testing and measurement and the appropriate instrumentation, presented two papers. The first covered the construction and use of a dip meter with a useful frequency range well into the microwave region that indicates energy absorption in a resonant circuit by means of a VSWR bridge instead of the dip indication in the customary built-in active oscillator approach. To achieve the resonant circuit needs to be coupled to the bridge either directly or through a coupling loop with the RF energy provided by an external signal generator. Carsten presented the circuit design of such a meter and demonstrated its function using actual microwave circuits.

His second paper 'Dual-frequency Generator for 144 MHz Power Amplifiers' did not at first sight appear to be relevant to 'Gigahertz'. However, in the course of the presentation it became clear that it was not technology for the 'low-frequency' two-metre band that Carsten was introducing, but a review of basic knowledge essential for all microwave experimenters. He first treated the topic of intermodulation and the determination of the intercept point in an easy-to-understand manner and without advanced mathematics. In his discussion of the dual-frequency generator required to perform the requisite measurements, Carsten also illuminated the problem of generating spectrally 'clean' oscillator signals (the never-ending story that has been discussed repeatedly by many presenters at past colloquia). Carsten visualised the various steps needed to achieve the desired clean oscillator signals with the aid of numerous spectrometer plots.

In his supplementary presentation, Jürgen, DC0DA, brought the audience up to date on the development of transverters for 76 GHz without the aid of bond technology. He started with a review of technical developments on the 76 GHz band since 1991, covering frequency allocations, output power levels and receiver noise figures achieved. In conclusion, it is now possible to obtain cw output power levels of around 14 mW, employing conventional wave guide techniques and varactor diodes. However, state of the art is a bond technology amplifier design by Michael, DB6NT, that is capable of producing an output power of 50 mW and features a noise figure of 8dB. As this amplifier module will not be widely available in the foreseeable future, one will have to rely on optimising existing amplifier designs. Jürgen discussed the necessary steps, ending his presentation with suggestions for the construction of a transmitter/receiver mixer capable of producing the aforementioned 14 mW output.

Michael Kuhne, DB6NT, one of the veterans of the colloquium, presented the final paper which introduced his 1.3 GHz transverter (MKU13G2B), a rework of the designs published in 1992 and 2000. This new transverter delivers highly credible performance in a small package that makes it suitable for both portable and base station use. The addition of a power amplifier opens the way for the construction of a superb transmit/receive system for the 23cm band as the well proven features of the original design have been carried over into this modernised version. 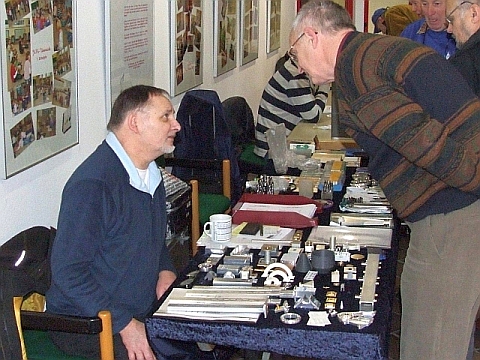 In is wrap-up, DJ6XV thanked the authors on behalf of delegates for their invaluable contributions but also expressed his disappointment at so few participants offering to present papers. As in years past, he stressed again that the success of the colloquium depended very much on a sufficient number of papers being offered.

Despite this year's disappointing response to the call for papers, the closing panel discussion reflected the confidence that the colloquium would again be held in 2011. There were also suggestions to present more papers featuring simple construction projects for the 'entry level' 10 GHz band to encourage newcomers to try their hand at microwaves. A revival of the old tradition of exhibiting home brew microwave equipment at the convention also found support, as did expanding the availability of test equipment to allow measurements on delegates' own construction projects.

Wolf-Henning Resch, DF9IC, this year again investigated the quality of oscillator/ transmitter signals of homebuilt equipment using his Perseus receiver. Adding converters for 144 MHz and 432 MHz allowed the investigation of transmitter spectra from short wave through 432 MHz at power levels of up to 100W. Wolf-Henning had also brought along a noise figure test set which allowed the determination of noise figures up to 1500 MHz and, with the use of transverters, up to 18 GHz. 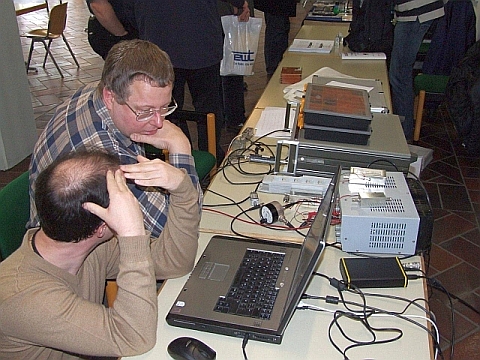 The proceedings of the colloquium will again be made available at cost (EUR 8.00 + EUR 3.00 P&P) and can be ordered from DJ6XV. The colloquium website (www.ghz-tagung.de) provides guidance on how to order.

Remark: The corresponding pictures you'll find in the German version on the website under 'Rückblick/2010/Bilder'.